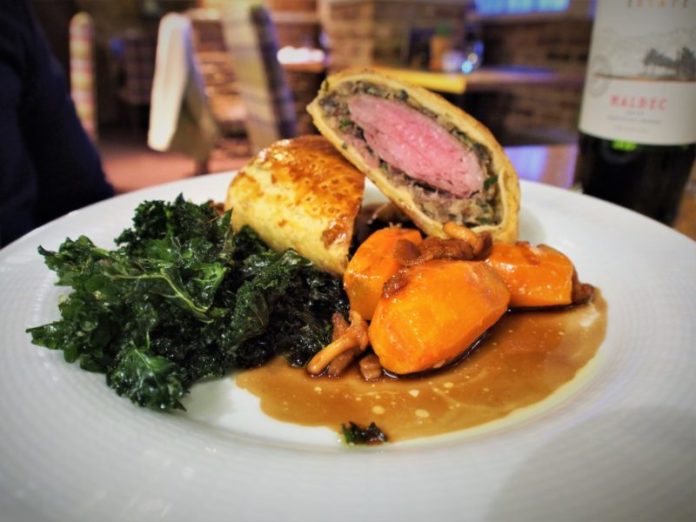 And Menu of the Year award goes to… The General Tarleton!

Last week my parents, Niki and I visited the General Tarleton for a spot of dinner. Now, the GT (as I know it) holds some lovely memories for me; I first dined there when I was just 18 – I can’t believe that’s 14 years ago – and with many celebrations and *cough* first dates being had there, it’s a place I know well and have always been fond of. Arriving at the General Tarleton, now under new ownership, it was nice to see the place busy. Outside, gorgeous red geraniums lined the staircase to greet diners as they walk through the front door of the double fronted building. The GT offers high-end bistro food in a traditional country-style setting. Once seated we opened our menus and it took a good 15 minutes to survey and decide what we were having. This is my kind of food and, in my opinion, it’s the best menu I’ve seen in a very long time. I could tell the menu had been well thought through and both the starters and mains sounded amazing. I’d have been so happy to receive any dish from the menu that it became almost impossible to choose. Having finally decided, we chose a Malbec Red to accompany our food, priced £24.00 per bottle. The boys also had a beer to start, as an Old Peculiar himself, Dad ordered a pint on draft and Niki chose an Estrella.

Our starters arrived. Mum had the Ad Hoc (£7.95) which was made up of a sausage scotch egg with GT’s black pudding, braised belly pork, and pea puree; Dad had the Whitby Crab Mayo (£9.95) with lightly curried crème fraiche and mayonnaise, served with a guacamole and sweetcorn ice-cream; Niki opted for the Beef Carpaccio (£11.50) with rocket, truffle and parmesan cheese; I chose the Seared King Scallops and the GT’s Homemade Black Pudding (£12.00) with a light curry oil, cauliflower puree, and incredible flavoured cauliflower floret bhajis. I went for their special, English Lobster Thermidor (£19.95). This half lobster was filled with the sweetest prawns and queenie scallops, crab meat and topped with cheese and brandy sauce. I’ve only had Lobster Thermidor once in my life and I really enjoyed this version, less watery of the two and the delicious addition of the other seafood was a delight. Dessert at the General Tarleton

By this time, we were all fairly full but in the review business you have to push through and I bet you’re all wondering what we had for dessert. I loved the General Tarleton dessert menu, it not only offered desserts, but you can pick your own cheese for the cheeseboard and it had a list of dessert wine – yum!

Dad isn’t a lover of puddings so opted for Harrogate Blue and Morangie Brie cheese, (£6.95) Niki had his second favourite pudding, Eton Mess Bombe (Banoffee is his all-time fav!) (£7.50) and Mum and I shared a Trio of Rhubarb (£7.50) which included rhubarb crumble, rhubarb crème brulee and rhubarb and ice cream. The food was faultless and with a man down due to illness the front of house staff coped seamlessly. There’s plenty of parking and only a 20 minutes drive from the centre of Harrogate. My only niggle would be that the place could do with a little TLC. The paintwork is looking a little tired and there were a few cobwebs about which was disappointing. But please don’t let that put you off; the menu choice is so so SO good. I’d also love to see what their Sunday Roasts are like as I’m sure they’ll also be top notch.

All in all, it’s a winning menu, lovely location and friendly service – I’ll always go back!

P.S. Thank you to the GT for the warm hospitality and fabulous dining.