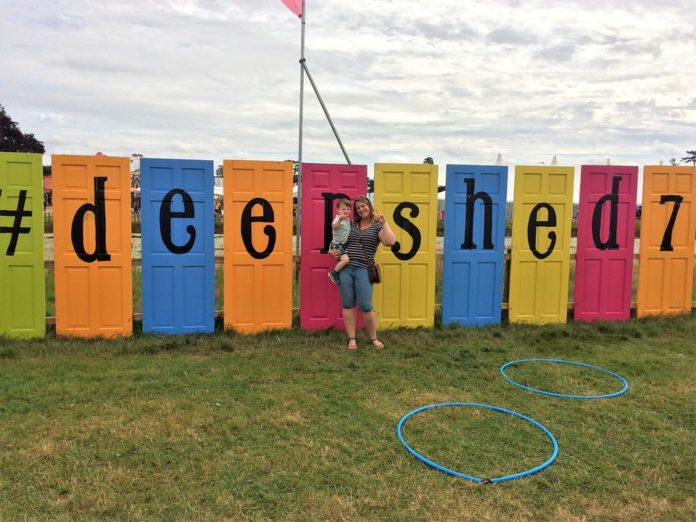 Now in its eighth year, Deer Shed 8 Festive is one of the best family festivals in the UK and it’s right on our doorstep!  They have a great line up to entertain you and your family, the whole weekend long on July 21 to 23. Each year holds a different theme, this year’s is The Wilderwild. It sounds adventurous so don’t forget to pick up your passes today! Deer Shed 8 has something for everyone including a cracking line up for 2017 festival including headline acts Teenage Fanclub, Kate Tempest and Divine Comedy. I was lucky enough to be an official blogger for Deer Shed 7 and have waited until now to share with you how great it was. I invited along my cousin, Emma and her son (my Godson), Harry. It was little Harry’s first ever festival! Where is Deer Shed Festival?

Deer Shed Festival takes place on a 90-acre site at Baldersby Park near Topcliffe, in North Yorkshire. Just 30 minutes from Harrogate, it was very easy to find and there was plenty of parking. Most families who attend kick off the school holidays by camping the whole weekend but as Harry was only two we thought one day of entertainment would be enough.

There are certain things festivals must have which would confirm festival status. Deershed has this in abundance; Helter-skelter; street food; flower headbands; the big stage; kites; tents with the acoustic artists and my favourite the gin bar… this time courtesy of Sloe Motion Gin. Everywhere you looked there was a quirky piece of art or brightly coloured flags, perfect for wowing the kids. Harry loved it, everywhere we went he’d point out the kits, hot air balloons and flags. Obviously the most important thing when festivalling are the toilets… especially if camping there all weekend. I was pleasantly surprised by the clean port-a-loos that were provided and I wasn’t the only one… Kat Got The Cream (another blogger) also felt these were clean throughout the whole weekend. The festival never felt over crowed and there was a great sense of calm which surprised me as we were stood in a field full of families having fun. This festival is all about the senses and education. The only way I can think to describe it’s like the best summer camp in the world where parents are invited, everyone is allowed to have fun, do their own thing, listen to awesome music and the adults can have a wee drink whilst letting their children explore and play.

The Music Line Up The musical line-up for Deershed 7 was also en point, with Patch and the Giant, alongside Lynchian provocateur Anna Calvi. Friday night headliner Everything Everything, Richard Hawley on Saturday, and Sunday night headliner Beth Orton were joined by many other great artist. I loved chilling out listening to the music whilst little Harry danced around us with is new favourite toy – the bubble gun! What’s on at this family festival

With Deer Shed Festival, music is only half the story, and with more than half it’s visitors are small folk, the festival is ready to entertain with a plethora of workshops, activities, and outdoorsy fun. It was a glorious day, perfect for the fun-loving festival vibes and it was just awesome. 2016’s theme was ‘At the Movies’, so most of the activities were themed around that, here were some of our favourites:
The Big Screen – when we arrived we’d clocked the big screen and noted Tangled and The Goonies would be showing later. Ideal to keep any aged children entertained, and as it was undercover it would be the perfect wet-weather plan should the heavens open. Aardman Model Making Workshops – guided by the makers of Wallace & Gromit (yes the people who made those cute little clay models) you could make a Shaun the Sheep or Gromit from clay to take home.
Minion making – made from what would have been waste, these Minions looked so cute all lined up drying off in the sunshine. The Television Workshop – from story-telling to running acting workshops, learning to do accents, composing film scores and even film making. Yes, at Deershed 7 they were making a movie called ‘Monsters VS. Machines’ and you had the chance to star in it. However, Harry was too interested in the sand pit and soft play area.
Soft play – perfect for the little’ns as most of the activities were aimed at children ages 5 to 11. Harry loved this area.

As an events manager myself, I know food is important to get right and at Deer Shed they do just that. The gourmet street food stalls were hard to choose between. We final settled on Yakumama as we’d been tipped off they do scrumptious wraps – they were right. Probably the tastiest wrap I’ve ever had along with the sweet potato fries with paprika mayo – yum! Although a lot of the food stalls weren’t cheap (around £4 for a wrap and £4 for chips) but they were of a high standard. Also, if you were camping you could always provide your own meals… but you’d lose some of the experience. There were plenty of bars around, obviously Sloe Motion took my fancy so Em and I headed over to try one of their cocktails (£5 each). After a very full on day we made one last stop off for some sweeties before heading home. Harry didn’t last more than two minutes before he was dreaming about the fantastic day he had. So this year is all about The Wilderwild… It looks set to be as good as the last so get your tickets now to avoid disappointment. It will be a great start to any kiddies summer holidays. For full, up to date ticket prices visit: http://deershedfestival.com/tickets/

P.S. Thank you to the Deer Shed Festival team for the tickets. Writing the post has been a pleasure. All good wishes and success for Deer Shed 8! Victoria
Welcome to my life. Written and directed by Victoria Turner. Here, I bring you the latest lifestyle news from eating out and travel to health and beauty, oh and of course gin! Often based in Harrogate but loves an adventure or two. Views are my own and honest!
2,895FansLike
4,379FollowersFollow
3,493FollowersFollow