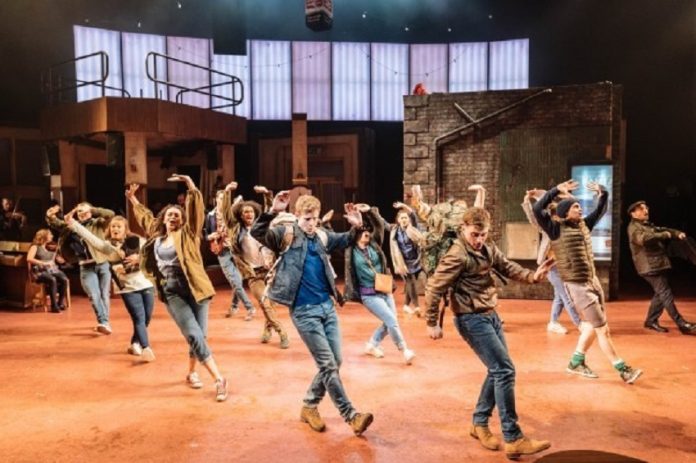 I was rather excited to be invited to the West Yorkshire Playhouse for a foot-stomping adventure with the hit musical Sunshine on Leith.

Originally a stage musical before being transformed in to the 2013 hit feature film adaptation, Sunshine on Leith is a tail of a close-knit family, their love for each other and the ups and downs of family life.

For me, it was the strength and charm of the cast which gave Sunshine on Leith its magic. We followed, Leith lads, Davy and Ally as they return from servicing overseas to be confronted with relationships, blind dates and commitments. As the pair embark on intertwining journeys in love, they begin to question what home really means to them as they rediscover their sense of identity. When singing I did struggle to understand the strong Scottish accents but that didn’t stop my foot tapping or kill the enjoyment!

This heartfelt and relatable musical written by Stephen Greenhorn, is the final Playhouse production in the Quarry Theatre before the exciting redevelopment; you’ve not got long to book your tickets, running until 19th May 2018. Artistic Director James Brining has directed this brand new version of the award-winning musical, set to the timeless songs of the much-loved band The Proclaimers, including “I’m Gonna Be (500 Miles)“, “Letter from America” and of course the emotive “Sunshine on Leith”, this feel good musical asks the question would you walk 500 miles for the one you love? (totally yes!)

Writer Stephen Greenhorn said: “It is fantastic to have the chance to revive and revitalise Sunshine On Leith with James Brining at West Yorkshire Playhouse. It has been 10 years since we first staged the musical in Dundee and I can’t wait to bring this musical back to theatre audiences in an exciting new production.”

The musical culminated in a foot stomping dance to “I’m Gonna Be”. A roar of applause filled the theatre as the cast received a well deserved standing ovation.

P.S. Thank you to West Yorkshire Playhouse for inviting me to see Sunshine on Leith.

Yorkshire based feature film due to hit cinemas March 2018

Victoria
Welcome to my life. Written and directed by Victoria Turner. Here, I bring you the latest lifestyle news from eating out and travel to health and beauty, oh and of course gin! Often based in Harrogate but loves an adventure or two. Views are my own and honest!
2,892FansLike
4,379FollowersFollow
3,491FollowersFollow