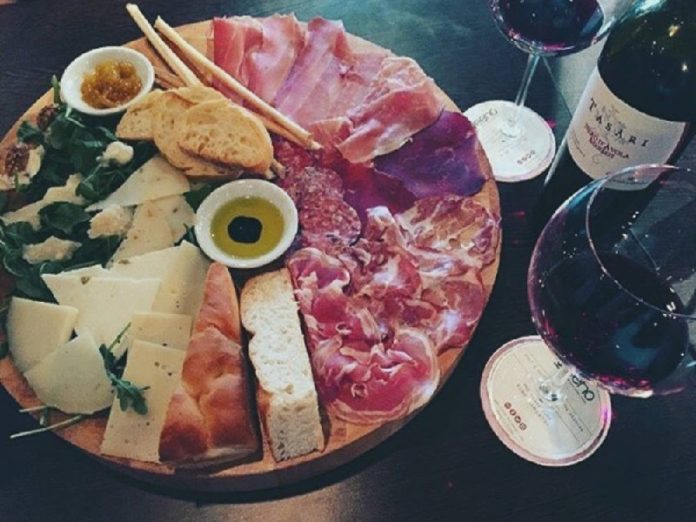 I love a good natter with friends but what makes a good natter even better is having it with good food and great wine. So when my friend Emily and I met up we obviously went to Veeno. The new wine bar has made it’s home in the new £10 million entertainment complex. You’d think it would be right at home among all the other chain restaurants and the much anticipated Everyman Cinema, expected to open this Autumn, but what you might not know is Veeno is a family owned business.

Owned by two friends, one of which is son of the Sicilian family Veeno. Having both grown up in Italy they moved to Manchester where they met and studies together. They both missed their Italian heritage, especially the culture of Aperotivo – which is nibbling and drinking in a relaxed and informal atmosphere with friends & family during the later afternoon and early evening… and so Veeno was born. Veeno, named after the family proudly stock it’s own wine from their family vineyard in Sicily,

Heading into Veeno’s in Harrogate, it has an intimate feel, almost like your in a private wine cellar. We started off with a Aperol Spritz – an italian classic made with Aperol, Prosecco and Sparkling Water and ordered an Italia platter to share – which included the most popular meats and cheeses from Italy. Veeno source all their “spuntini” (Appetisers) from Italian producers. The cheese was fabulous, some had olives in them others were nutty in flavour. The meats were particularly good, may favourite being one flavoured with truffles. 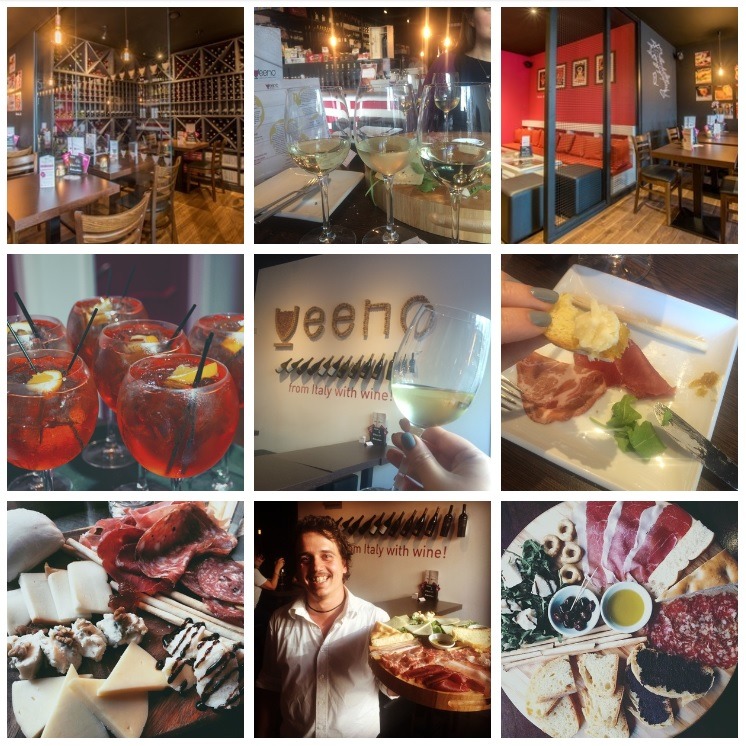 It’s all about the Vino

Emily and I were welcomed with open arms to Veeno in Harrogate, we sat, talked, drank and put the world to rights. Whilst doing so we also ordered a Vino flight which is a unique way to try three different wines from their best labels. We opted for the white tasting which takes you on a journey through the flavours of Sicilian white grapes

The Aperitif Wine – this wine was fresh,  and intense. It’s a great bouquet of fragrances including vegetable undertones.

Veeno’s Driest – grown on the Grillo vines these grapes are grown on the highest hills of western Sicily to get the very best flavours. this wine has notes of oak and acacia.

The Wine of Love – this is a fruity number with shades of spice. It’s name came about because it is thought to be a very successful wine to drink on a first date… there’s always been a second!

The service in veenos is friendly, you’re greeted by passionate people who love wine and Italian food. Do ask they for thei recommendation as they’ll be able to find the perfect wine for you.

I think Veeno will do really well in Harrogate, especially when Everyman cinema opens in late Autumn. I can imagine going for a couple of glasses and sharing platter before a film.

Veeno opened it’s first Italian Wine Café in 2013 just off Albert Square in Manchester city centre. Within a year, they opened cafés in Leeds and York. Today, they have Wine Cafés in multiple locations across the UK. Growth is great but I hope they don’t loose their Italian charm and family history in favour for success and a chain empire. ​

If you like your wine, you may like my review of the Devonshire Arms, they have their own wine cellar, packed full of rare and exclusive wines. Read about it here.

P.S. Thank you ever so much to Veeno for the surprise food and wine! Five things I learn’t when I went for a Bottomless Brunch!

Victoria
Welcome to my life. Written and directed by Victoria Turner. Here, I bring you the latest lifestyle news from eating out and travel to health and beauty, oh and of course gin! Often based in Harrogate but loves an adventure or two. Views are my own and honest!
2,810FansLike
3,996FollowersFollow
3,408FollowersFollow