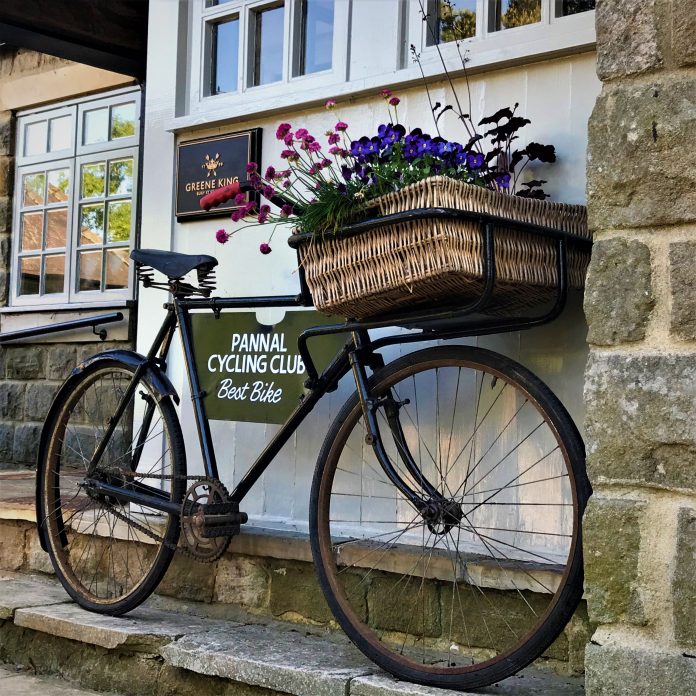 It’s always nice to find a good local where you can catch up with friends. Just before I jetted off to Greece for a fun filled, sun filled holiday, I got together with Chris and Em my longstanding friends from High School for some excellent eats at the Squinting Cat. Of course where there’s free food, Niki isn’t far behind.

In recent years you may have known the Squinting Cat to be a little scruffy round the edges and not much of a draw for the locals.

People of Harrogate, you’ll be pleased to hear that it’s all changed.

Under the ownership of Greene King, the pub has just undergone a super stylish renovation. The interior décor takes inspiration from local history and landmarks while making the most out of the venue’s original features, including parquet flooring, exposed brickwork and stained glass window.

As a little girl, I grew up just a few fields from the Squinting Cat so it’s nice to see this pub’s been given a little TLC – could be your next local?

We had a wide choice from a selection of pub classics and house favourites, such as Fish and Chips, Macaroni Cheese and Red Thai Curry to burgers and steak, including the Avocado and Chorizo, Prime Steak and Dirty burgers. They also do great sharing dishes such as melt in your mouth Nachos and Meat Slider, which we chose to share for our starters. After a little bit of a wait our starters arrived. The Nachos (£7.79) were very different to your stodgy, cheese loaded mess, instead it tasted fresh – the zingy tomato salsa stole the show and really mad the dish. The sliders (£10.99 with Rosemary-salted fries) weren’t as good as I’d hoped, one beef topped with bacon and cheese and one buttermilk chicken. The buns were a little too dry, but I’m fussy with my bread a the best of times. Nothing that a bit of dip couldn’t solve and we ate them all! The mains were a big improvement from what it used to be. Chris chose a hearty Braised Beef and Bone Marrow pie (£9.99). I had a little taste and it was rich is both texture and taste. And that gravy – oh so good!!! Emma chose the Seafood Grill (£14.79) which included salmon steak, sea bass and king prawns, served on a bed of delicious sapphire. It looked amazing and I was jealous I didn’t choose it myself as I love seafood. Niki had a dirty burger (£10.79) and boy was it dirty, piled high and oosing with chilli! Niki was wearing cream chinos which he’d planned on taking to Greece (just two days later). I don’t know what came over me but I started to act like a mum! Putting survettes on his legs to protect his trousers… but sure enough my instinct was right as his fork catapulted from his plate straight into his lap. Lucky save! I ordered the steak frites (£10.99) – a flatter steak served with a beautiful garlic butter. Cooked on the medium side to my request for medium rare, it still tasted delicious and was very tender. Served with Rosemary-salted fries. The Squinting Cat offer a range of steaks and specials so it’s worth checking their black board.

For the gin lovers

Rather excitingly the pub offers a ‘Gin Flight’ which allows you to try three excellent gins with flavour matched garnishes, served on a board with tonic water. As a totally gin addict, this was for me. The pub even has it’s own book of gins on offer, including a page of essentially my gin cupboard – all the local gins – from Slingsby to Whittakers! Priced at a reasonable £12 it was a great way to try three different gins which I’ve never had before. By this point, the two non-drivers (Em & Niki) were a little bit tipsy so when we’d thought we’d settled on two puddings to share, Nikki went and order three and a cheese board! Although I’d have loved to have tried the cheese board, we cancelled that order – I’m not sure I could have managed it. We did order three desserts though! Plum crumble, chocolate brownie and sticky toffee pudding (all priced at £4.49). All I can say is order the brownie… no order five brownies. They were gooey, chocolatey and heavenly, with chunks of chocolate thrown in for a surprise. The brownie is served with a mint chocolate chip ice cream so if you don’t like mint, I’d advise you ask for a different flavour or with cream.

Overall thoughts on the Squinting Cat

Overall, we have excellent eats and it’s a big improvement to how I remember it; the place looks brighter and cleaner than ever before. Although the service of food from the kitchen could have been faster, the waitresses were really attentive and ensured we had everything we needed throughout the meal. The price is brilliant, overall £110 for four people – and we ordered a mountain of food! Plus, the Squinting Cat always has a deal or two for those thrifty Yorkshire fold among us.

I certainly think this place will get busier and busier as the new housing developments start to pop up. And it might make a great Father’s Day outing!

P.S. Thank you to the Squinting Cat for inviting me to review their food. This was a paid for collaboration but views are my own.

My Top Pizza Takeaways in Harrogate

Victoria
Welcome to my life. Written and directed by Victoria Turner. Here, I bring you the latest lifestyle news from eating out and travel to health and beauty, oh and of course gin! Often based in Harrogate but loves an adventure or two. Views are my own and honest!
2,892FansLike
4,379FollowersFollow
3,450FollowersFollow